By Unknown - June 18, 2018
Gonzar to Melide to A Salceda
Today we completed two 30km days in a row and we are within 25km of Santiago. We've walked over 700km from Saint Jean Pied de Port, France, for more than a month.
And after two days of rain, the sun came out and the sky was clear and blue. 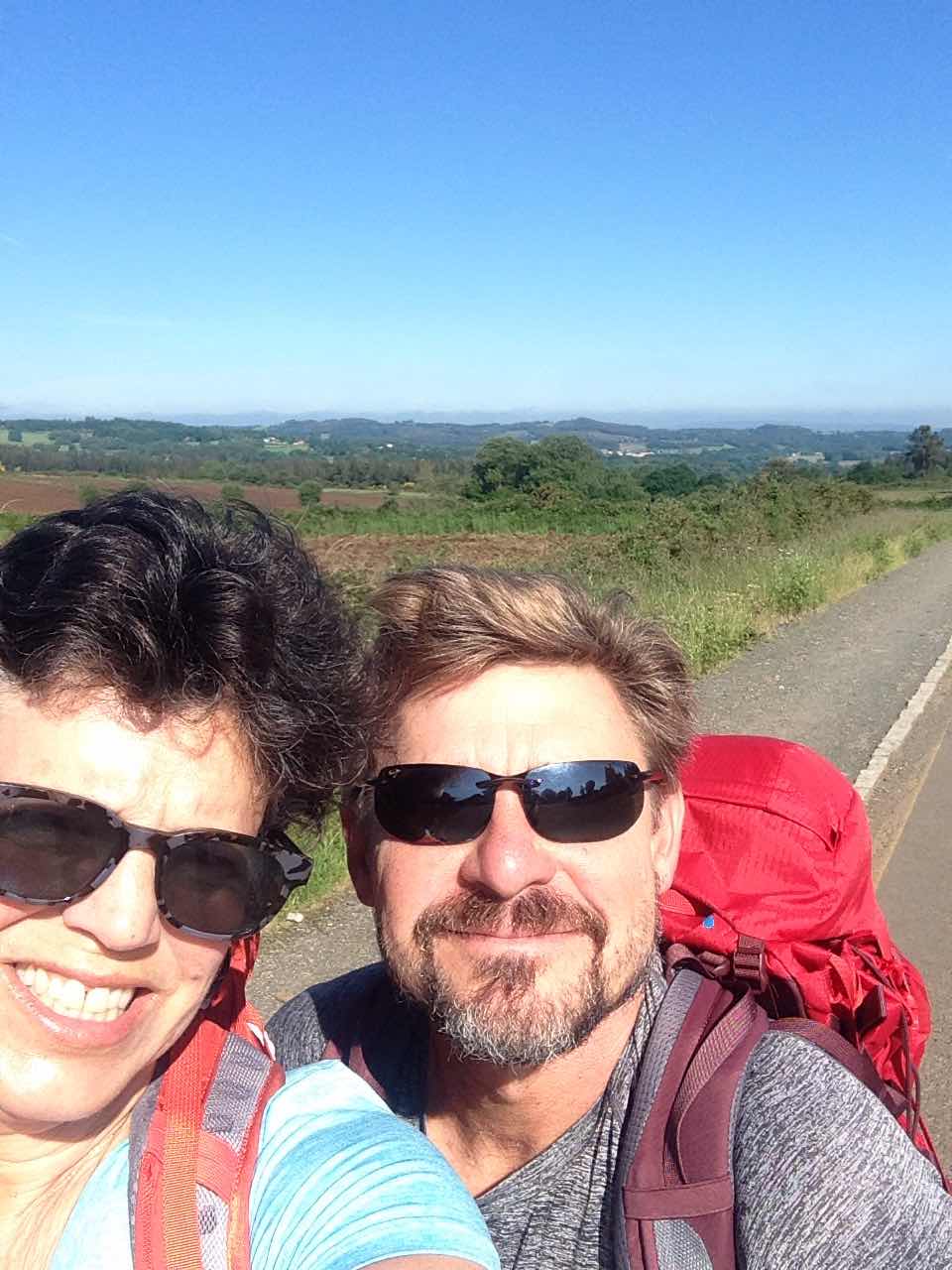 We stopped in Melide for the night where we found an amazing vegetarian-vegan restaurant Casa Alongo run by Concha. She was happy to speak English and share her passion for fresh, local food. After a Camino of meat and typical pilgrim meals, it was a great find. She served us grilled vegetables with avocado aioli and tostada de pulpo--Galician bread toast with local cheese and octopus. 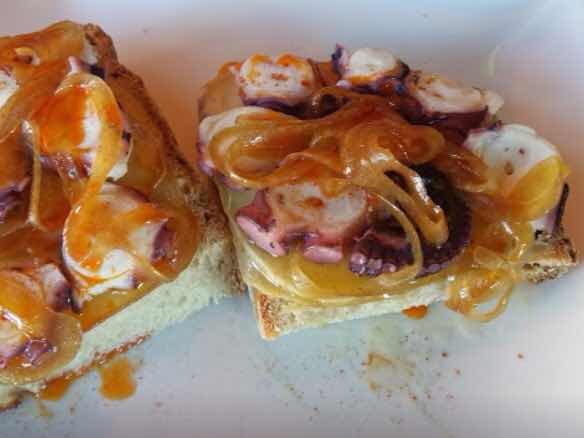 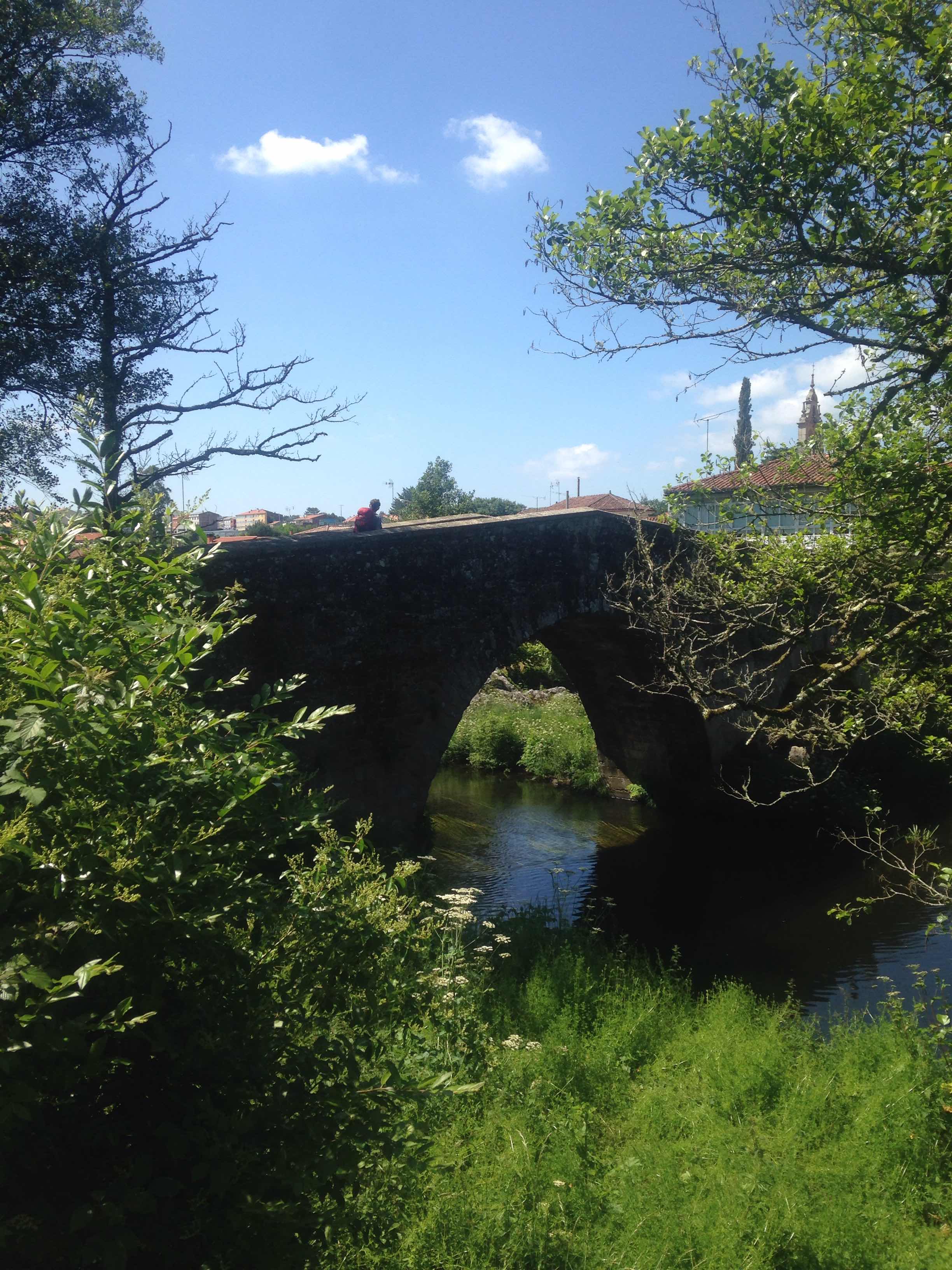 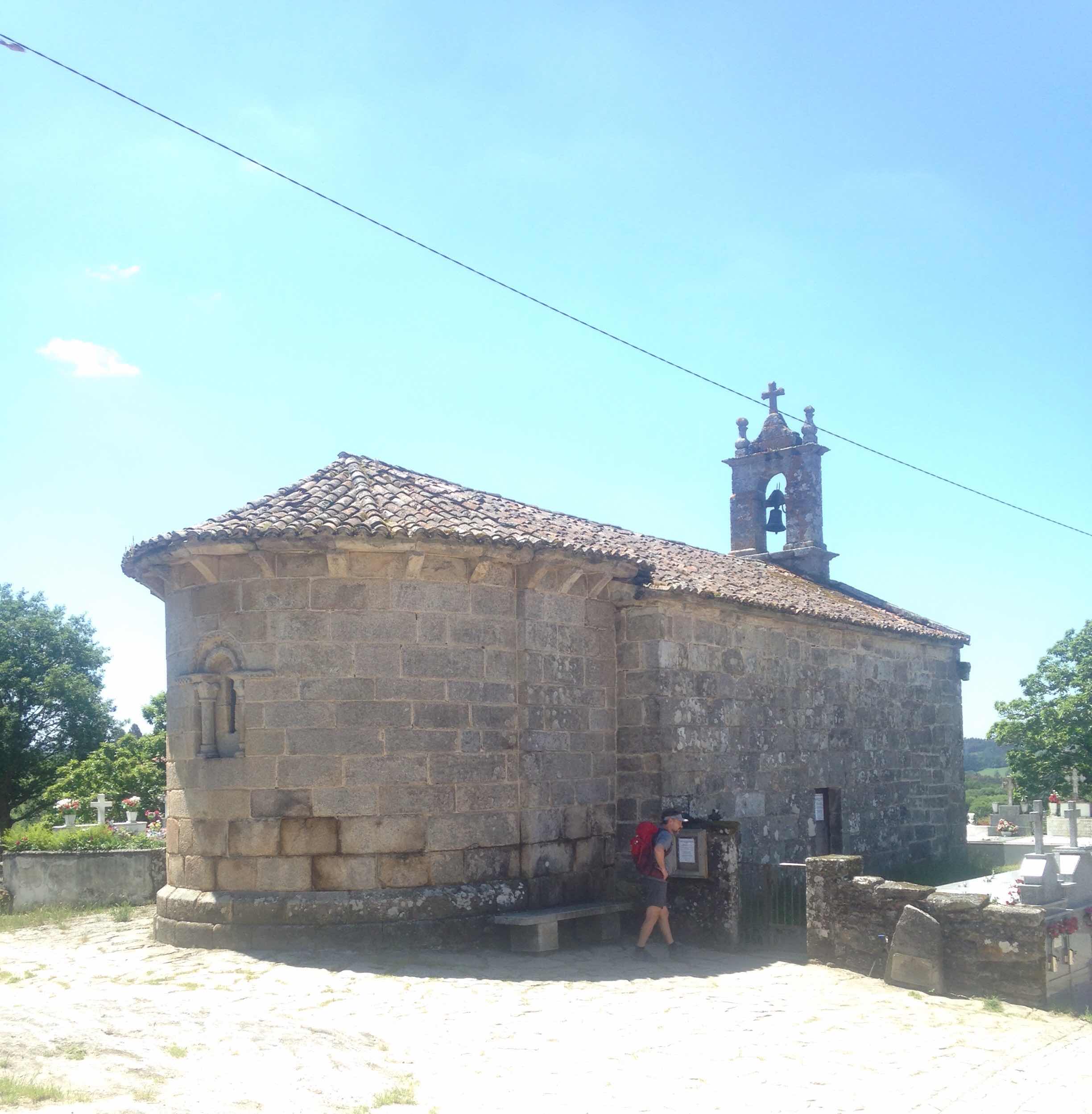 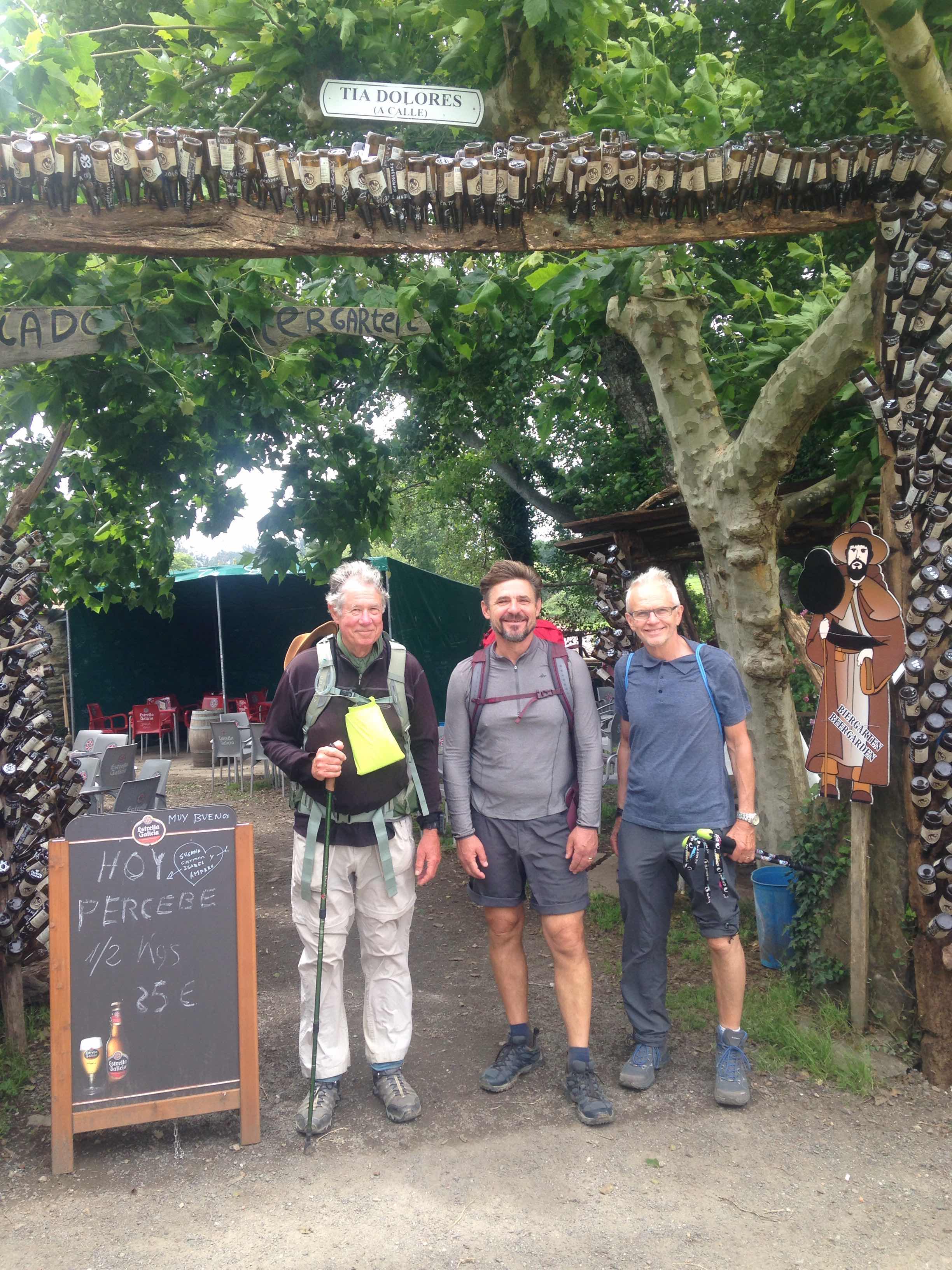 One bar along the road has bottled their own La Peregrina lager and invites pilgrims to write something on the bottle and decorate the patio. 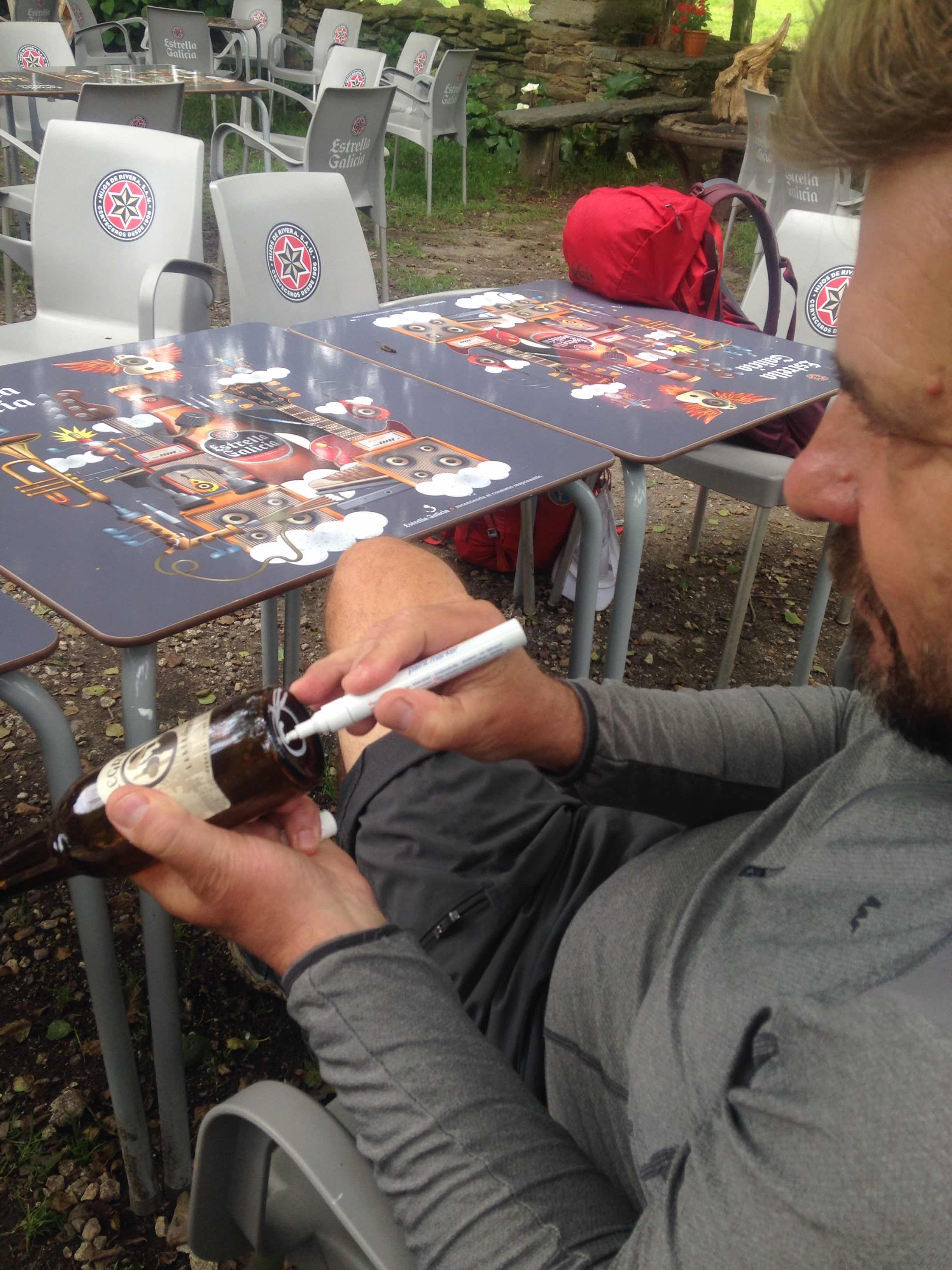 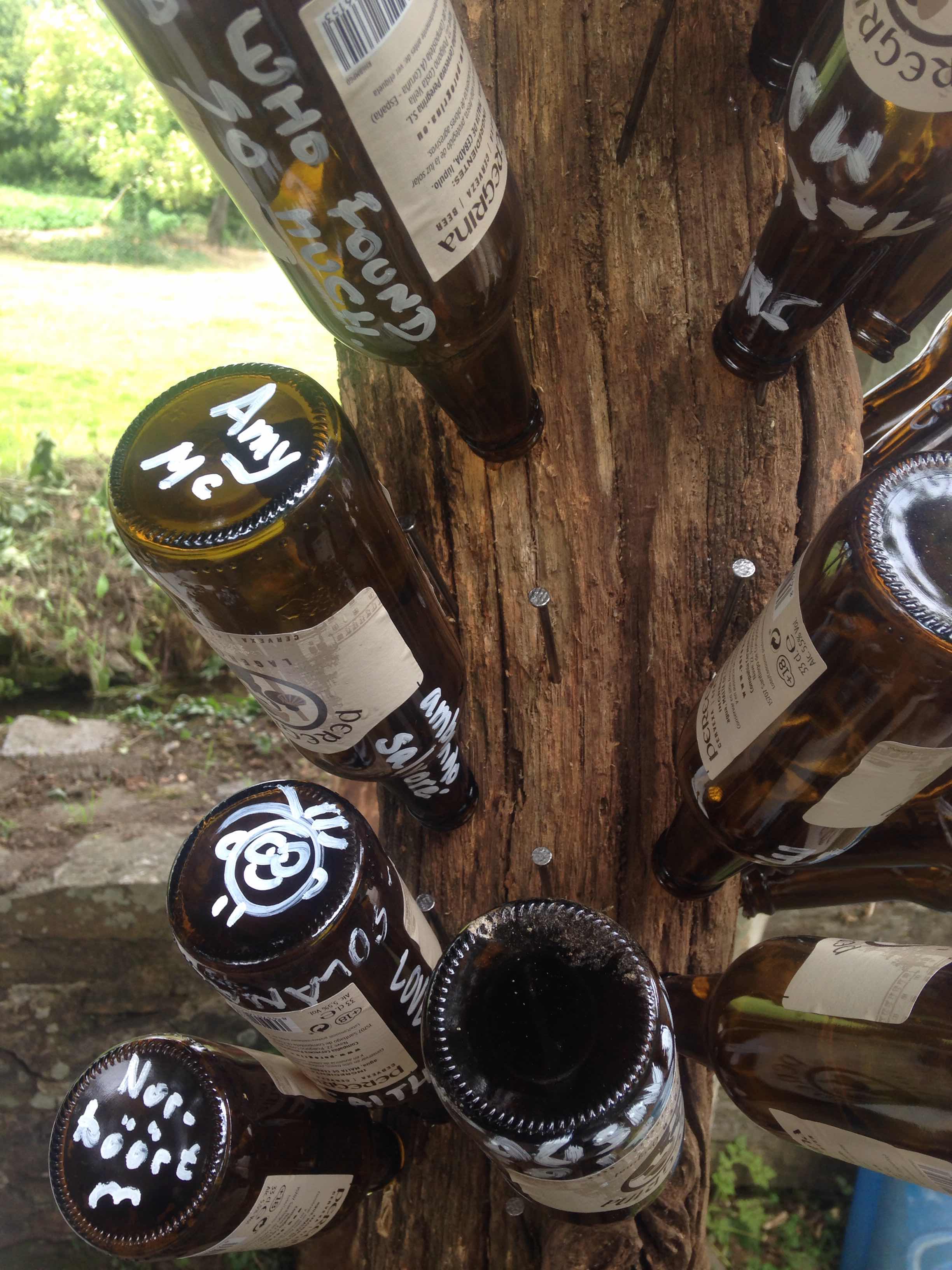 We walked our second to last day with friends we met a week ago--John, Norbert and Agnes. We talked about our families and what it's like to make friends on the Camino.
Everyone is a blank slate and you can start a conversation with where are you from, where did you start or where are you going, and never get to what do you do. You realize everyone has a story--they are running from something or to something. The majority of people are kind and generous and appreciate acts of kindness.
And as different as we are from each other, we have a common goal of completing the Camino.
These three found each other early on became Camino friends--walking together, supporting and encouraging each other--and were finishing the Camino together. We met just outside Sarria and had dinner and breakfast together. It wasn't till breakfast that one asked what I did for work. When we bumped into each other a few days later, one said he had me pegged as a CEO and another was convinced I was a architect.
But I didn't know that night that he was a retired British officer, and son of a general who has served all over the world. He told some great stories of time with Prince Philip and the Queen and his rank order favorites in the royal family. We had the time to talk about grandchildren and faith and gratitude for all our blessings.
I walked with Norbert and talked about each of our two sons, faith and the political climate in Germany and the US. Amy and I ran into him multiple times in the previous days because he was slowed down with sciatic pain. We would spot him, stop and ask how he was. Amy empathized with the pain and encouraged him to rest. He was in pain but determined to walk slow and finish in Santiago.
We stopped for the night in A Salceda. Everyone is planning their last kilometers into Santiago. Some are making it in one 25km stretch and others will stop a short distance from Santiago so they can enter in the morning, get their compostela certificate and make mass in the cathedral at noon.
It's all about preparing ourselves physically and spiritually for finishing well after five weeks of the journey. 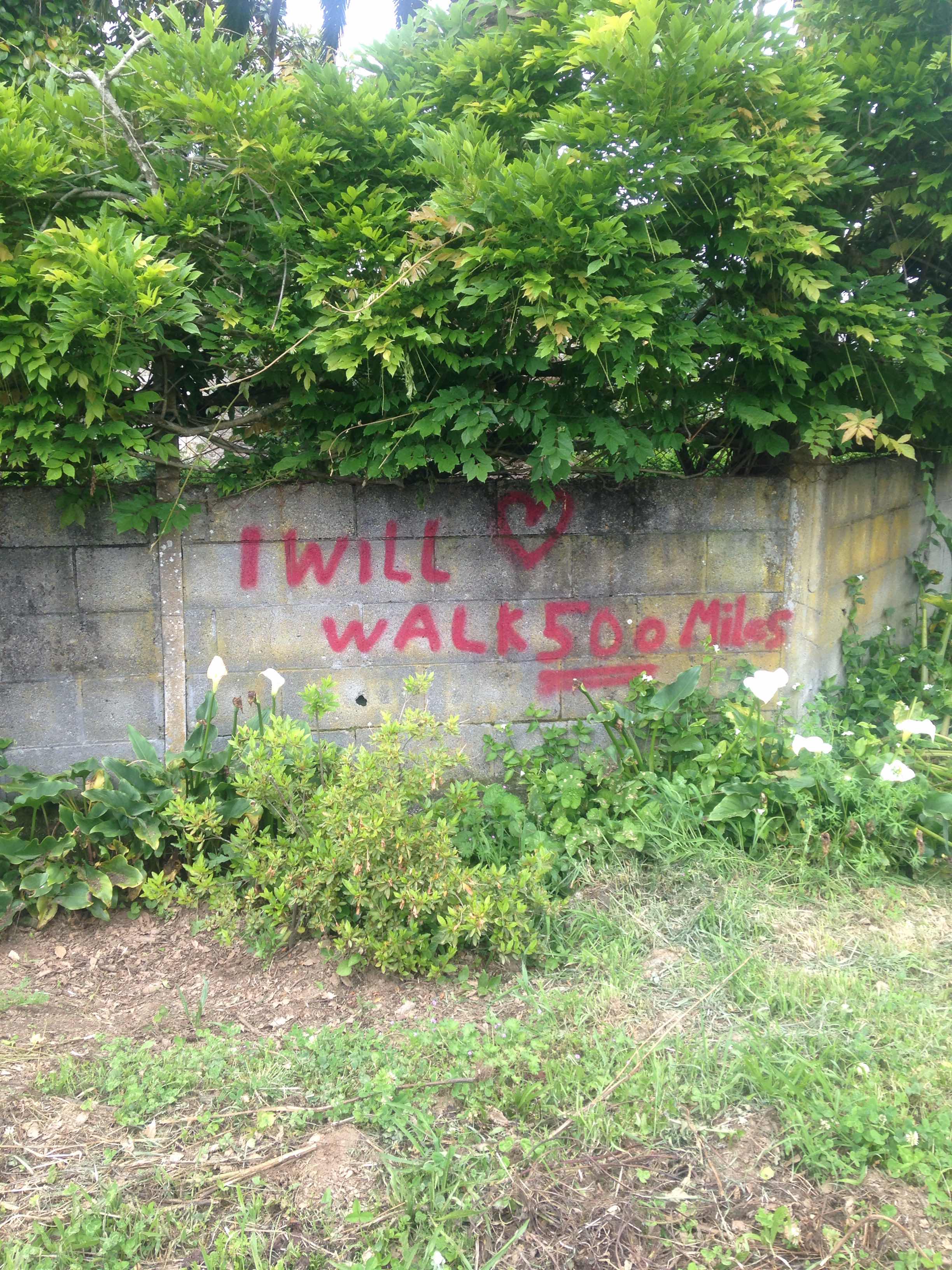 Popular posts from this blog

Amy and I have traveled to Turkey twice before, but this is our first time leading a group into Cappadocia.

What an amazing way to start our 14 day pilgrimage on the footsteps of Paul. It feels like we're in a different world. The landscape is more like the moon or a scene in Star Wars.

Hittites, Persians, Greeks, Romans, Turks all passed through and conquered. First century believers returned here after Pentecost and Peter wrote his first letter to encourage them in their persecution and suffering.
In the fourth century, Simon devoted 42 years of his life in isolation on top of a fairy castle, seeking time alone with God. People brought him food and were drawn to his way of life and stayed. The soft tufa volcanic stone allowed for monks and whole communities to create monasteries and homes hidden inside whole mountains.
We visited a handful of those 365 churches (one for every day of the year) that once existed in the Goreme and Zelve valleys.  It strikes me that carving cave space…
Read more

Sunrise on the Sea of Galilee 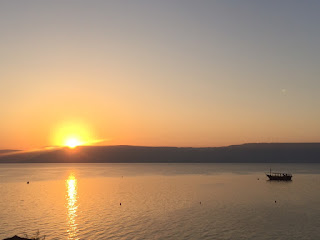 Waking up to the sunrise on the Sea of Galilee a beautiful and meaningful experience. The Lake of Kinneret is full of life—the result of the Jordan flowing down from Mount Hermon from the north and settling 600 ft below sea level. It's where Jesus met the first disciples, James and John, sons of Zebedee, and Andrew and Peter, all fishermen on this lake. Today we will go to Capernaum, Jesus' home-base, a border town that included Centurions and tax collectors.

Across the lake to the east are the Golan Heights in our day, and in Jesus' day it was the Gentiles—the Decapolis, Kursi and pigs. This is the place of faith testing—Jesus walking on the water with Peter, calming the storm, checking for fish on the other side.

This is the countryside. Quiet. Calm. Peaceful.
Yesterday, we drove up from Tel Aviv where we spent the night after our 14 hour flight from San Francisco. We started at Joppa, or Jaffa, where Jonah found a ship to run away from God, and where Peter ran toward Corne…
Read more

Camino de Santiago Day Thirty-seven and Thirty-eight: We made it! 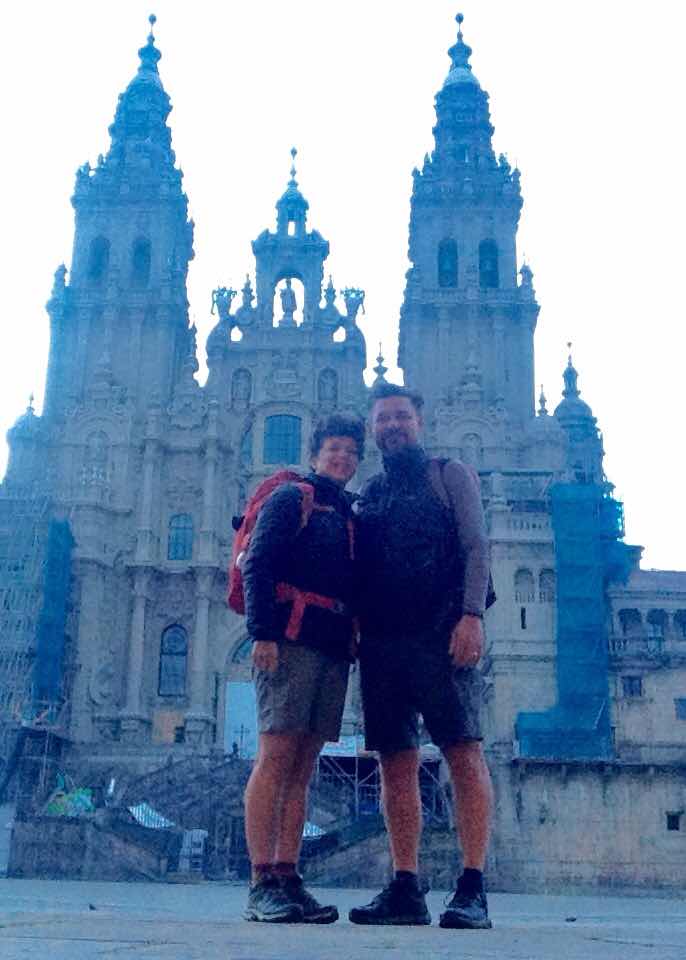 A Salceda to Santiago de Compostela

We decided to walk 22km to the outskirts of Santiago and walk the last few kilometers in the morning.
Neither of us could sleep, so we got up, packed our mochilas for the last time and walked to the old city at 5am. It was dark and rather than being joined by other pilgrims, we passed a few late night partiers and a woman walking her dog. It's not the entrance into Santiago we pictured, but we were all alone in the Praza do Obradoiro in front of the Cathedral.
It was June 17—thirty-eight days and 780 kilometers since we started May 11, in Saint-Jean-Pied-de-Port.

We were two of the first ten pilgrims in line for our compostelas, which meant we got tickets for a free lunch at the historic parador. Peter from Australia showed up and introduced us to Michael and Linda from Washington DC, who also got the lucky tickets.


Peter also knew Ted and Darlene from Winnipeg, and gave them contact, since my phone died and we couldn't contact them. But we …
Read more