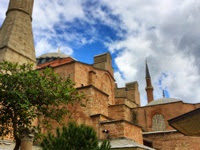 It was also built over the temple of Apollo and  churches built by Constantine and then Theododius in the fourth and fifth centuries. It was a symbol of a new era of Christianity in an empire that killed the Apostle Paul three hundred years before.

The inside is the church is lit by clear windows. The windows created flexibility in earthquakes, but it also lit the ceilings covered with gold mosaics. This was the largest dome in the sixth century, and still the fourth largest dome in the world.
The gold mosaic ceiling--24 million pieces of gold just in the dome--would have dazzled with the light streaming through. Heaven lighting earth. What did those believers experienced as they entered this massive, dazzling space? What hope did it give worshipers, as they entered space larger than any…
Post a Comment
Read more
More posts