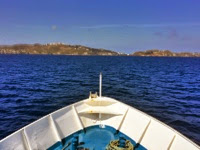 John was exiled for not pledging allegiance to Emperor Domitian as Lord. It was only because of Domitian's death, and a new emperor who was sympathetic to the Christians, that John was released. John spent 18 months on Patmos in exile, then returned to Ephesus where he died a natural death at 105.
While he was there with his scribe Procorus he had a revelation from Jesus about the things that would soon take place. He wrote the seven churches all along in the same mail route as Ephesus. These were brothers and sisters who suffered and worshipped together. He could see the coast of modern day Turkey and wrote one day "there would be no sea," maybe his own longing for fellowship.

We think Procorus delivered the Revelation to the churches before John was released. Imagine what it would have been like for him to return to  his church in Ephesus, and be visited in his old age by church leaders from the other six churches.