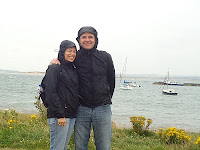 Note to reader: Since so many enjoyed Amy's blog last week, this blog is written by another guest blogger who is anonymous.

Mike and Amy left the Northumbria Community on Saturday morning. It was like leaving home, they told me. Apparently they grew attached to the creaky floors, ancient Aga (oven stove that heats and bakes at the center of the old farm houses in England), friendly people and daily offices (community prayer four times a day) in the old Hetton Hall, which the community will be moving out of this fall and into their new home in Acton, about 20 miles south. Sorry for the run-on sentences, but I don't know what they have already told you.

They arrived in Durham on Saturday afternoon on a cloudy, almost rainy day. They rolled their 21 inch bags to Hatfield College where they stayed in one of the student dorm rooms. Hatfield College is named after Mike's ancestor Thomas de Hatfield on his mother's side. Here's what I found out about Thomas:
Hatfield was bi…
1 comment
Read more
More posts