The Power of Telling Our Stories: Part Two of My Unexpected Meeting with the President of the United States 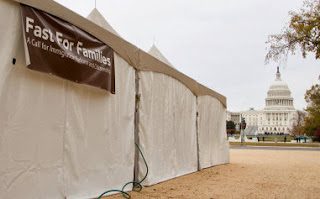 I left the West Wing of the White House and immediately called my wife. "Amy, I found out why I was asked to meet with the President." And I told her the story of my op-ed, and the opportunity I had to tell the story of our church and immigration reform.

Before the meeting in the Oval Office I heard about the Fast for Families group camping on the Mall in view of Capitol Hill. I wanted to see their commitment to immigration reform expressed in fasting and praying until the House brings something to the floor to vote on immigration reform.
I hailed a cab, and discovered the driver emigrated from Ghana over 30 years ago. I mentioned I had just met with the president. I told him I was a pastor and I met with the president to discuss immigration reform.
Surprised, he said, “I’m a Christian. And I’m a Presbyterian.” I took his hand and prayed a short blessing for him.
Ali took me to a row of tents on the Mall in front of Capitol Hill with a banner that read, “Fast for Families: A C…
1 comment
Read more
More posts