Showing posts from December 1, 2013
Show all

The Cross and the Cause: Back to the Tent 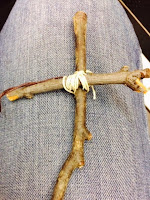 Sunday night. I am sitting in the terminal in SFO awaiting my third DC red eye since July. The first was to attend the Pray4Reform Day of Action and Prayer, the second was my visit to the Oval Office. Somewhere along the way I need to change my handle from "accidental" to "intentional" advocate.

It's been seventeen days since my unexpected meeting with President Obama and faith leaders to discuss the moral urgency of immigration reform. After that meeting I visited the Fast for Reform tent, a group raising awareness for immigration reform by fasting, praying and telling their stories. They were barely a day into their 20 day fast.

We spent about thirty minutes together sharing stories. Then, Patrick the Franciscan Action Network leader, handed me a cross on a lanyard, and asked me to lead in prayer.  I assured them we (the President and faith leaders) were each working hard in our own way to see immigration reform passed sooner than later.

Since our meeting I ha…
2 comments
Read more
More posts