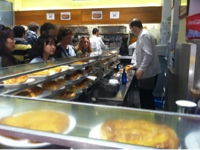 Although we have enjoyed coffee all over the world, our love for drinking coffee began in Spain.

We stand at the counter at La Mallorquina which has served pastries on the Puerta del Sol since 1894.

"Dos cafés con leche." (I Iike the steamed milk at breakfast because it adds some nutrition to the meal.)

He places the saucer, spoon, and sugar packet in front of us. The white cups and saucers add a respect and dignity to the drink versus paper cups and lids.

"Dos napolitanas con chocolate." (They are known for their napolitanas, and again, the dark chocolate is healthier than the crema.)

He places a knife and fork before us and we love the clinking. There is such an effort in setting, clearing and cleaning real flatware and porcelain rather than tossing plastic and paper.

Moments later he brings the pastries, then the cups with only espresso. He pours the steamed milk…
2 comments
Read more
More posts