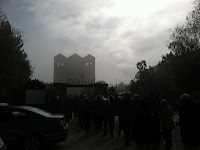 The day began with a climb up Mount Tabor in mini van taxis to the Crusader Church of the Transfiguration. Below it was raining and on top the mountain was shrouded in clouds. As we had experienced each day in Galilee, it rained when we had shelter, and it cleared up as we were out in the open. So the clouds and the storm blew by and we were left with a magnificent view of the Jezreel Valley below. The Mount of Transfiguration was transfigured before us.  It was awesome. The crusader church is beautiful with light streaming in through the upper windows, a mass being held while we were visiting, and Paula led a devotion on the transfiguration, which took place before Jesus began to announce his death and it must have bolstered the disciples for the days ahead leading to Jerusalem.
Beth Shean is one of the Decapolis, the ten cities from which people came to follow Jesus. This is a magnificent Roman city with bathhouse, theater and public latrine.
I was reminded that day of Luke 10:
Was t…
Post a Comment
Read more
More posts